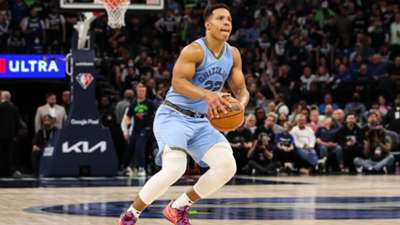 Memphis Grizzlies guard Desmond Bane will be out for up to three weeks with a toe injury.

Bane did the damage to his right big toe during a 114-103 win over the Minnesota Timberwolves at FedExForum last Friday.

The Grizzlies on Tuesday revealed Bane will be sidelined for at least a fortnight.

A statement released by the franchise said: "After further evaluation, it was determined that Memphis Grizzlies guard Desmond Bane suffered a Grade 2 sprain of his right big toe during the November 11 game against the Minnesota Timberwolves. Bane will be re-evaluated in 2-3 weeks."

Bane is averaging a career-high 24.7 points, 4.8 assists and 4.9 rebounds per game for Memphis in an impressive season to date.

The Grizzlies are fourth in the Western Conference at 9-5 ahead of a meeting with the New Orleans Pelicans on Tuesday.