NBA Game of the Week: Nets can take advantage of Sixers injury absentees 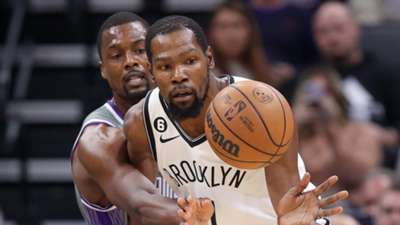 Kyrie Irving is never too far away from making himself the headline.

The 30-year-old returned on Sunday from the suspension imposed by the Brooklyn Nets after social media activity that appeared to promote a book and film with anti-Semitic tropes.

Following eight games on the sidelines before an eventual apology arrived, Irving was back on the court in the 127-115 win against the Memphis Grizzlies, scoring 14 points along with five rebounds.

Playing just 26 minutes at Barclays Center, he could feature more against the Philadelphia 76ers on Tuesday as he clears off some of the rust.

However, as far as the Sixers are concerned, it will be more about those missing in action.

Former Net James Harden remains out with a foot injury, and he has now been joined by Joel Embiid, who will miss the upcoming clashes with the Nets and the Charlotte Hornets.

The Cameroonian will be a huge miss for Doc Rivers, having been in sensational form of late.

Embiid has an average of 32.6 after 12 outings this season, with his 4.6 assist average also higher than he has managed before in his career.

The 28-year-old had scored over 30 in five of his last six games, including a monstrous performance against the Utah Jazz where he put up 59 points as well as eight assists and 11 rebounds, showing just what a big hole he will leave.

Philadelphia are also still missing Tyrese Maxey, the only player other than Embiid and Harden (22.0) to be averaging over 20 points this season (22.9).

The Sixers had won three on the bounce before defeat last time out against the Minnesota Timberwolves, and face a Nets side that have experienced a bit of resurgence under coach Jacque Vaughn.

Having lost two of his first three games after replacing Steve Nash, including conceding 153 in the loss at Sacramento, Vaughn has seen his team overcome the Portland Trail Blazers and the Grizzlies in their last two.

With no Embiid, Maxey or Harden on the other side of the court, this will surely be an ideal opportunity for the Nets to build some much-needed momentum.

That is the highest percentage of a team's points in an NBA game played in the state of Pennsylvania since Wilt Chamberlain's 100-point game in Hershey on March 2, 1962 (59.2%). pic.twitter.com/mAIfeit4GW

Recent talk of a potential trade for Harris needs to be pushed to one side as the only available Sixers player to have an average in double figures this season (14.9).

He is another who has suffered recent injury problems having missed the last two games with a hip issue, but he practiced on Monday and surely will be used if possible given all the other absences.

Harris stepped up to support Maxey when Embiid and Harden were both out against the New York Knicks earlier this month, scoring 23 with nine rebounds.

Of course, many eyes will be on Ben Simmons against his former team, especially after his performance against Memphis, but Durant remains Brooklyn's danger man.

While the Nets have struggled for consistency, Durant has been an ever-reliable figure, having not scored fewer than 26 in any of his 17 games this season, at an average of 30.4.

KEY BATTLE - Can Sixers defense keep them in the game?

With so much attacking talent unavailable, it will inevitably mean Philadelphia's ability to keep the opposition's scoring to a minimum will be crucial.

Despite the efforts of Embiid, the Sixers have one of the worst records in the league for scoring this season, with only the Los Angeles Clippers (105.2) averaging less than their 108.6 (level with the Wizards, the Heat and the Rockets).

They do indeed have the third-best record for points against, with only the Clippers (105.4) and the Dallas Mavericks (105.3) conceding fewer than their 106.6 per game.

The Nets won three of their four meetings with the Sixers last season, although Rivers' men were victorious in their last contest in Philly, winning 110-102 at the end of December at Wells Fargo Center.