Share via
Home / Cricket / All / England must go again as... 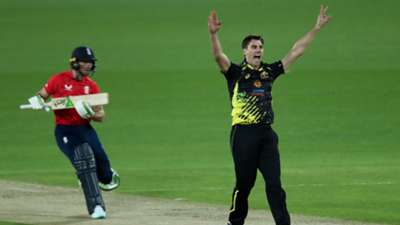 The celebratory drinks have barely been consumed and England's World Cup heroes are having to put the pads on again.

Just five days after beating Pakistan to win the T20 World Cup in Melbourne, Jos Buttler will lead his team out at the Adelaide Oval on Thursday to take on Australia in the first of three one-day internationals.

The tourists have not been shy in pointing out the relentlessness of the cricket schedule, with Moeen Ali calling it "horrible", while coach Matthew Mott added "it's not ideal".

However, while Buttler agrees with the sentiment, the England skipper has no doubts that playing against the old enemy will be more than enough motivation for them.

"It's tough, I think, absolutely. But we just get on with it," he told reporters. "It is a fast turnaround. There's no point hiding away that it will be a challenge for us, having had such a high a few days ago.

"Once you get over the line and you're playing against Australia, I'm sure those competitive juices will get going."

With the 50-over World Cup in India just 11 months away, both teams need to be thinking about their preparations already, with Australia having a point to prove after an insipid defence of their T20 title in their own country.

The hosts' loss against New Zealand in their opener and an inability to post a sufficient run rate in other games ultimately saw them crash out at the Super 12 stage, and watching England win it all at the MCG must have made it a more bitter pill to swallow.

Pat Cummins leads the team having taken over the captaincy from Aaron Finch, and has reason to be confident with a very strong side selected and a good recent record in the 50-over format.

Australia beat England 2-1 in their most recent ODI series in September 2020, and have won their past four ODI series at home; their last home series defeat coming against India in January 2019.

They will hope to take advantage of a tired England, though will have to be wary of a team that seems to be finding its feet in limited overs cricket again under Mott and Buttler.

Performing at the death

Death overs are often where games are won and lost, and this could be where Australia come into their own. Cummins has a bowling dot ball percentage of 57 per cent during the last 10 overs in men's ODIs in 2022, with only Afghanistan trio Mohammad Nabi (67 per cent), Yamin Ahmadzai (60 per cent) and Rashid Khan (58 per cent) having a better rate among players from Test-playing countries (minimum of five overs bowled).

In addition, Cameron Green has a bowling average of 3.2 during these death overs (41st-50th) in 2022, the best of any player from a Test-playing country (minimum of two overs bowled).

One England player with added motivation will be Jason Roy, who was overlooked for Alex Hales at the T20 World Cup.

Roy is just 46 runs away from becoming the 12th player to score 4,000 for England in men's ODIs; if he achieves the milestone in Adelaide, his 102nd in the format, he will become the second-fastest England player to reach it after Joe Root (91 innings).