Share via
Home / Cricket / All / Magnificent Latham and W... 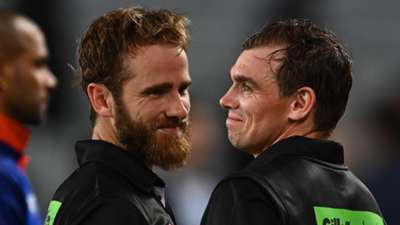 A magnificent stand from Tom Latham and Kane Williamson sealed a seven-wicket win for New Zealand over India in the first ODI of the series at Eden Park.

Shreyas Iyer (80 off 76 balls), captain Shikhar Dhawan (72) and Shubman Gill (50) made half-centuries as the tourists posted an imposing 306-7 in Auckland on Friday.

Tim Southee (3-73) and Lockie Ferguson (3-59) were the pick of the bowlers for the Black Caps, who then showed why they are top of the rankings in the 50-over format with a brilliant run chase.

It was advantage India after Umran Malik (2-66) struck twice on his debut to leave New Zealand 88-3 in the 20th over, but an unbroken partnership of 221 from Latham and Williamson secured a resounding win with 17 balls to spare.

Latham made a sublime unbeaten 145 off 104 balls and skipper Williamson 94 not out as the Blacks Caps made a strong response to their T20I series loss to India.

Dhawan and Gill laid a great platform with a century stand, but both openers fell with 124 on the board before Ferguson cleaned Rishabh Pant and also got rid of Suryakumar Yadav cheaply.

Iyer struck four sixes and as many fours, while Washington Sundar (37 off 16) provided late impetus and Sanju Samson chipped in with 36.

Umran had Devon Conway caught behind and saw the back of Daryl Mitchell after Finn Allen fell to Shardul Thakur, but that was as good as it got for India as Latham and Williamson took the game away from them.

The experienced duo steadied the ship and then started to motor, with India - missing a host of regulars - unable to halt the flow of runs, Arshdeep Singh going for 68 from 8.1 overs on his ODI bow.

Yet another milestone for Southee

It was another memorable day for New Zealand paceman Southee, who became only the fifth New Zealand bowler to take 200 ODI wickets.

He moved above Chris Cairns to go fourth on the list of the Black Caps' leading wicket-takers in this format.

Latham and Williamson put on a show

The game was in the balance when Latham came in at number five to join his skipper at the crease.

It had soon swung firmly in New Zealand's favour courtesy of brilliant knocks from such a consistent duo that have delivered time and again over the years.

Wicketkeeper-batter Latham raced to his seventh ODI century off only 76 balls, ending up with five sixes and another 19 boundaries. The composed and classy Williamson registered a staggering 40th ODI half-century.