Hazard on Germany's pre-Japan protests: 'They'd have been better off not doing it' 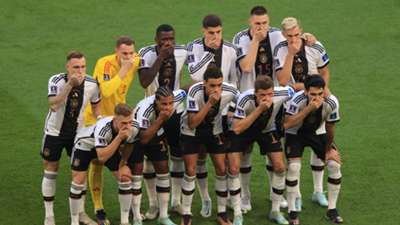 Eden Hazard has told Germany's players to stick to the football rather than protesting after Hansi Flick's men fell to a shock 2-1 loss against Japan in their Qatar 2022 opener.

Germany's starting line-up covered their mouths in protest during their pre-match team photo on Wednesday over FIFA's response to the OneLove campaign.

Football's governing body warned any teams that backed the anti-discrimination initiative faced sanctions, including a yellow card for captains who sported OneLove armbands.

However, Die Mannschaft warmed up for the Japan match wearing training shirts featuring rainbow-coloured trim in another apparent show of support for LGBTQ+ rights.

While the stance of the Germany players was widely praised, Belgium and Real Madrid forward Hazard believes they should leave non-footballing matters for others.

"They lost the match," Hazard told reporters. "They would have been better off not doing it and winning.

"We're here to play football. I'm not here to pass on a political message, there are people who are better placed for that. We want to concentrate on the football."

It wasn’t about making a political statement – human rights are non-negotiable. That should be taken for granted, but it still isn’t the case. That’s why this message is so important to us.

Denying us the armband is the same as denying us a voice. We stand by our position. pic.twitter.com/tiQKuE4XV7

Germany and Belgium were two of seven European teams that had planned to wear the specially designed armbands in Qatar, where same-sex relationships are criminalised.

Asked about his own stance on the issue, and whether he would have liked to have shown his support, Hazard said: "I'm not at ease talking about it. I'm here to play football.

"We were kind of forbidden from... I didn't want to start the match with a yellow card; it would have been annoying for the rest of the tournament.

Belgium dodged an upset in their opening group match, meanwhile, as Michy Batshuayi's strike earned them a 1-0 win over Canada at Ahmed bin Ali Stadium.