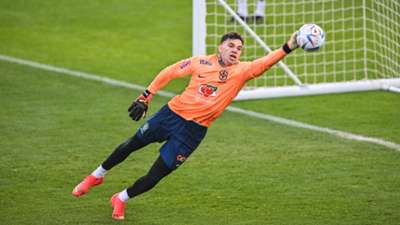 Brazil goalkeeper Ederson says the Selecao can only fulfil their World Cup dream if they have a "victorious mentality" over the coming weeks.

Tite's side are chasing a first success in football's most prestigious competition since 2002, with their campaign set to get underway on Thursday against Serbia in Group G.

Further challenges against Switzerland and Cameroon await them, as they look to end a two-decade wait at Qatar 2022, with many tagging them as the favourites.

But Manchester City stopper Ederson says any reputation will only be lived up to if they give it their all and keep their eyes on the prize.

"We know how difficult it is, but we have a good team with total capacity of reaching the final and trying to win it," he told his club's official website.

"We need to have this mentality, a victorious mentality. We need to think that we are going to be there, we will work to be there and that's what we'll do.

"A World Cup is a World Cup. When you talk about the World Cup, what comes into the mind of any player that can play it, is the image of him lifting the trophy - and it's no different to me.

"When I think about the World Cup, I imagine Brazil lifting the trophy."

13 - Brazil have scored 13 direct free kick goals in the World Cup since 1966. It's more than twice as many such goals as any other side (Germany, 6). Speciality. #FIFAWorldCup pic.twitter.com/XG4zk5NSIz