Share via
Home / Soccer / All / Kane training with Engla... 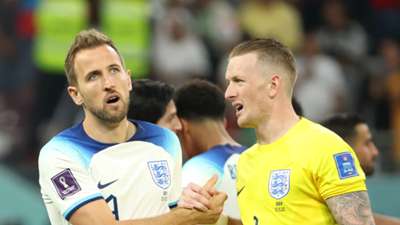 Harry Kane looks set to be available for England's next World Cup encounter with the United States after Jordan Pickford confirmed the Three Lions captain had trained with the rest of the squad.

The Three Lions' star striker was replaced by Callum Wilson during the 6-2 opening win against Iran on Monday and was subsequently sent for a scan on his ankle.

Kane's importance to Gareth Southgate's set-up has been illustrated over back-to-back tournaments, having won the Golden Boot at Russia 2018 and helped lead England to the Euro 2020 final last year.

Fears that he could miss Friday's Group B encounter with the USA look to have been dispelled by Pickford, however, who confirmed the Tottenham forward had been going through drills with his team-mates.

"I think he's good," the goalkeeper stated. "[He's] probably a bit sore, but he's out on the grass with us today. That's good, he's our captain and he's fine yeah.

"Everyone gave their all when he came off, Callum came on got the assist for Jack's [Grealish] goal and played well. Everyone's training well and working hard. Everyone's here for a reason to play football.

"Harry is an unbelievable player. He's a leader he's the captain, and we all look up for him. But there's also opportunities for other lads as well.

51 - Harry Kane (51) is one of only two players to have scored 50+ goals for England, along with Wayne Rooney (53). Indeed, only Gary Lineker (10) has netted more goals at the World Cup for the national team than Kane (6). Leader. #ThreeLions pic.twitter.com/QYFtkr0JZV

Kane failed to find the back of the net during his side's rampant opening victory, but could yet exceed Wayne Rooney's all-time England goalscorer record over the course of the tournament.

The Three Lions are top of Group B and will effectively qualify for the knockout rounds with a victory over the USA ahead of their final group stage game against Wales on November 29.