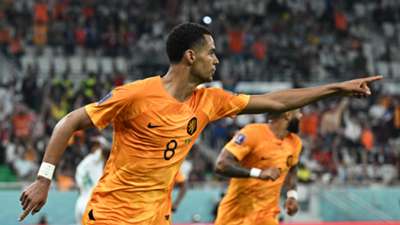 Late goals from Cody Gakpo and Davy Klaassen gave the Netherlands a 2-0 win over Senegal in their World Cup return at the Al Thumama Stadium on Monday.

The Oranje had produced a lacklustre performance in their first World Cup match since the 2014 tournament in Brazil, but secured all three points.

With just six minutes of regulation time left on the clock, Gakpo raced into the box and rose in front of Edouard Mendy to meet Frenkie de Jong's cross with a header to break the deadlock.

Louis van Gaal’s side were not convincing, but they had a second goal deep into stoppage time when Klaassen slotted home right at the end of a disappointing Group A contest.

Back on the biggest stage after missing out on qualification for Russia 2018, the Oranje started with a point to prove.

In an open start, that eagerness saw the Dutch created the first opportunity, with midfielder De Jong dallying in front of goal and being prevented from getting a shot away on the break.

Steven Berghuis then fired an effort over the crossbar just over five minutes before the break, with Youssouf Sabaly mustering the only shot on target of the first half in response.

Van Gaal turned to Memphis Depay, who had been deemed not fit enough to start, with the need for a game-changing spark around the hour mark.

It was Gakpo who came up with the elusive opening goal with time running out, though, nipping in ahead of Mendy to meet De Jong's delivery and nod beyond the Senegal keeper

Klaassen then sealed the win deep into stoppage time, applying a simple finish after Mendy could only palm Depay’s tame shot into his path.